The firmware of Galaxy S is upgraded to JM1 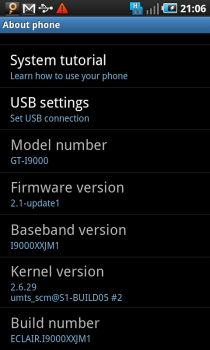 I have upgraded my Galaxy S to JM1. Before the installation, I was wondering whether that is Android 2.2 upgrade. That actually that is not. I found that is some improvements in default Samsung application set. I found there are only a task manager added in the default application set and more detailed instructions about unlock screen at sleep mode. That is! They are still Android 2.1.

HTC Wildfire will be arrived at Telstra on 24 August

Telstra has announced HTC Wildfire will be in their shop on 24 August. Moreover, you get it as a pre-paid for $349. I think that is the first pre-paid Android phone in Australia.

Well, let's talk about the phone. That is pretty much standard HTC phone. It got Sense UI and Friend Stream. There are "non-standard" HTC feature. It has a LED flash(but I don't think that is very useful, that is much to use a torch.) The brightest feature is Swype. That is a sliding input method. I got it in my Galaxy S. That is very useful.

In a conclusion, that is very standard HTC phone, but it has an attractive price tag.
Reference:
Telstra

Google stated Nexus One will be their new standard dev phone. The price is good too, $529. Moreover, it will have Android 2.2(you need to download the update after the device is switched on). That is not bad at all. If I had not bought my Galaxy S, I would consider this option.

Too sad, Google Wave will be gone soon

I read the news from news.com.au. Google will shut down Google Wave. That is so sad. This is a new way of communication. Personally, I did not use that much, but that is an interesting way, which can put everything, such as wiki, photos and chat, into a thread. At the start, a lot of people are exciting about it, but after a while, the people seem to forget about. Now, it is going to die soon. Well, Google said they will fit the Google Wave technologies into other projects. I hope they can give a new life to it. 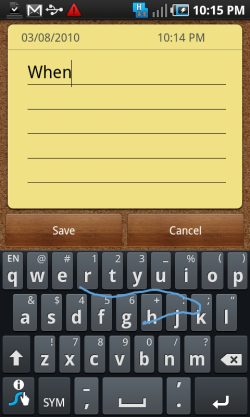 Swype is a new type of input method which came with Galaxy S, my new phone. I love it a lot. I don't type in the virtual keyboard any more. I only need slide the words in the virutal keyboard. That is much faster than the traditional typing. I found that is very helpful when I use MSN. Without it, using MSN in mobile is a painful task. After I started to use it, MSN chating in a mobile is much more comfortable. For details of Swype please visit their official website and watchdemo video. I really know how to describe it in words.