During weekend, I got the update of linux-image-2.6.28-15. Then my HP Mini 1001 Speakers got sound now! Previously, I can't get my speakers working on Ubuntu Remix 9.04. This is the power of Opensource Communities. They can fix bugs quickly.

One last point, please remember to mute the headphone and unmute front speakers from the mixer. I can't get it on the first boot from the update, because the front spearkers are muted by default.

Motorola has announced their first new Android Phone. Same as HTC Hero, it has their own custom-made homepage,such as MOTOBLUR, getting facebook, twitters togethter. It has very similar with others, 3.5mm headphone jack, 5M pixels camera,etc. However, It is different from the most current Android phones, Hero and Galaxy, it has QWERTY keyboad. 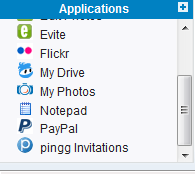 I found the applications bar in my Yahoo! Mail is changed. Some applications are added:
- Attach Large Files, previously it used ZumoDrive for sending large file. Now, they changed provider to drop.io. The old application from Zumo Drive changed its name to "My Drive".
- Add an Automatic Organizer, it can automatic categorize your emails into folders.
- A new application for Flickr is added.
- Two electronic invitation applications, Evite and Pnigg Invitations, are added.

Finally, we have the apps of Facebook in Android. I have used it for a day. 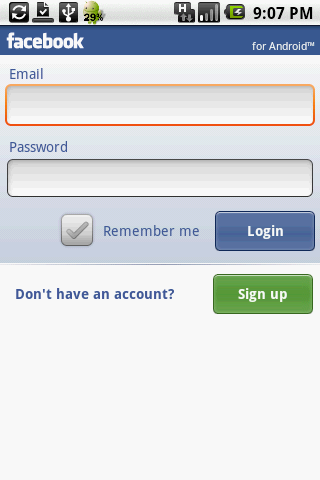 That seems very similar with iPhone version website even I found a bit smooth on webpage than the apps.

HTC has announced their new Android Phone, Tattoo(According to the photo HTC released, three colors, Black, White and Purple will be available to choose). That is very similar specifications with HTC Magic, 528 Mhz CPU, 3.2 megapixel color camera , 512 MB ROM. The major difficult is the screen size is 2.8 inch, Magic has 3.2 inch. Moreover, the RAM is a bit less, 256MB. So Tattoo is targeted as lower end market. But there are some improvements than HTC Magic, it has Sense UI and 3.5mm headphone jack. Lastly, there is an interesting change. The trackball is replaced by 4-Way navigation control. I love the trackball of my HTC Magic. It make the navigation much much easier!

Tattoo will be released in Europe arond beginning of October.